According to ‘nature’s guide to health’ a popular scientific information website in the UK, sandalwood tea can boost brain power, treat insomnia, reduce stress and boost the body’s immune system. 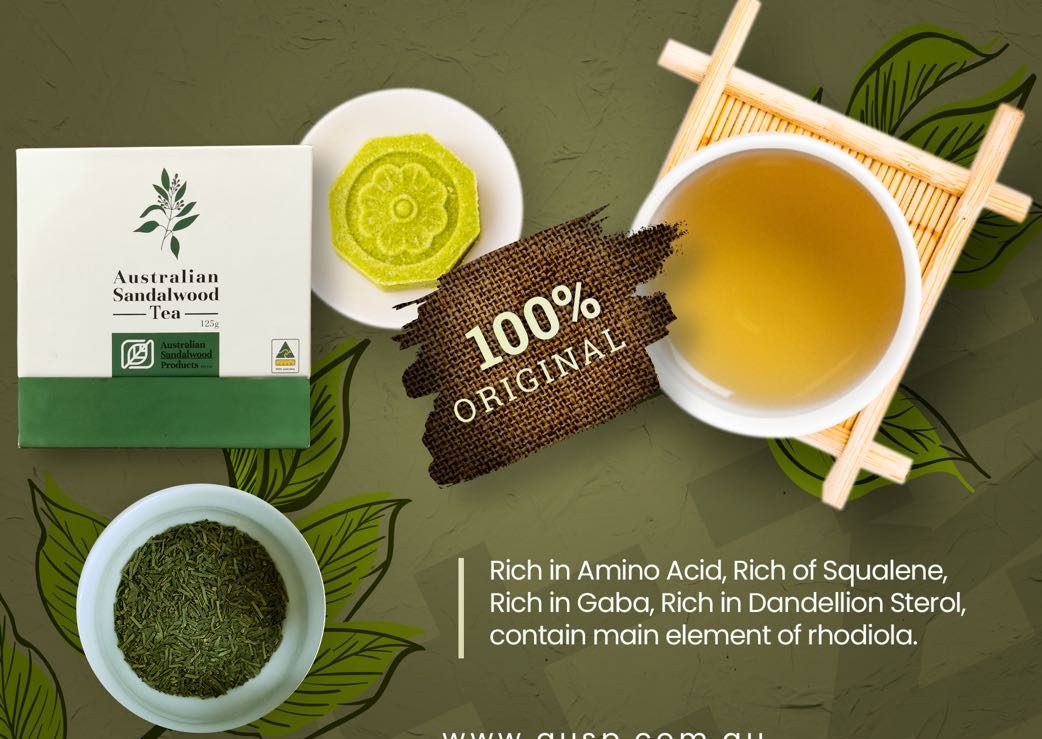 History and cultural and religious significance: In rural areas of Australia, traditional indigenous people boil sandalwood leaves with water, making it a strong, dark, almost syrup like mixture. It can then be consumed or used as a lotion for skin irritations. This powerful mixture is still used by many of the native indigenous people of Australia to treat various diseases.

According to ‘nature’s guide to health’ a popular scientific information website in the UK, sandalwood tea can boost brain power, treat insomnia, reduce stress and boost the body’s immune system.

Origins: Australia is rich in natural resources, abundant sunlight, clean environment with huge differences in a daily climate temperature, suitable for the growth of many forms of flora. Australia also has many major wine regions. Sandalwood is a small evergreen tree, growing naturally in Western Australia and north Queensland. Sandalwood is a woody flowering tree that once matured produces a highly aromatic wood. Oil can also be extracted from the tree and the roots and is used for scents and perfumes and for both western medicines and traditional Asian herbal medicines. The timber and the oil also hold significant value in religious rites by Buddhists, Hindus, Parsis and Muslims throughout Asia.

There are 15 known variants of Sandalwood that grow naturally across the Indomalaya, Australasia, and Oceania ecozones, stretching from India through Malaysia to the Pacific Islands and continue to Hawaii and some islands off the western coast of South America.

In recent times, Sandalwood plantations have been planted in Western Australia utilising the two most commercially viable variants of the Sandalwood tree being the Australian Sandalwood tree, Santalum Spicatum and the Indian

Six species of Sandalwood are native to Australia.

Australia has the world’s largest population of sandalwood.